I had been looking forward to this day for a year and a half. The 2014 Edward L. Bernays had been on my radar since I began working in public relations and I was not going to miss them. I had an entire week blocked out in my May calendar solely dedicated to submitting these award entries for Mixte and our clients. I had stocked up on snacks, coffee and nonperishable canned goods. My cell phone and internet service were impeccable and my files organized and ready. You could say I was determined.

Each year the Public Relations Society of America of San Diego/Imperial Counties hosts the Edward L. Bernays Awards Celebration, recognizing the most esteemed public relations (PR) professionals and campaigns in the region. The Silver Bernays Awards recognize complete public relations programs incorporating sound research, planning, execution and evaluation. These entries must meet the highest standards of performance in the profession.

May rolls around and I hit the ground running, pulling every ounce of work Mixte did with Environmental Health Coalition to defend the Barrio Logan Community Plan Update. Several 400-page binders are submitted and lovely life at Mixte proceeds as usual until October.

“Bernays time,” I remind myself.

On October 15, Sarah and I get the best parking spot in Balboa Park so I already know it’s going to be a great night. I’m nervous but I bury it and enjoy the evening. After mingling with our PRSA friends, Sarah and I find our seats at The Prado and the presentation begins. My heart rests in my throat but I try to keep it cool. Sarah captures my more serious side in this photo. 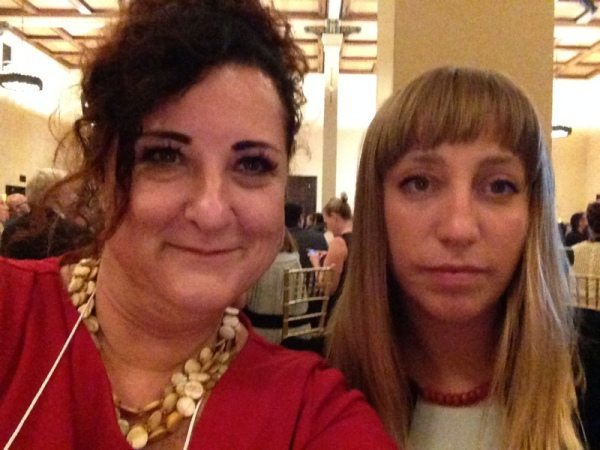 One by one the large San Diego agencies collect their awards. There’s cheering, clapping and photo bombs. Then I hear it.

“Mixte Communications, in the silver category of Community Relations for David vs. Goliath: The Barrio Logan Community Plan Update”. Sarah nudges me and I’m on autopilot, walking up to the stage, shaking hands, collecting the beautiful glass award.

I’m stunned and tearful heading back to my seat when I hear, “Mixte Communications, in the silver category of Reputation/Brand Management for Environmental Health Coalition: Defender of Barrio Logan”.  I’m turned around to more applause, more shaking hands, more autopilot and one more glimmering glass award.

Let me explain what these mean to Mixte and EHC.

EHC, a community group that fights toxic pollution in underserved communities, led San Diego’s David vs. Goliath battle of the year. Thirty years of EHC’s policy work to protect the Barrio Logan Community Plan Update culminated in a ten-month communication, governmental and legal battle against billion-dollar, global corporations and their million-dollar lobbying firm. Mixte’s public relations, social media, website, blog and email communications played an essential role in putting the industry and its lobbying firm under public scrutiny, positioning EHC as the go-to expert and driving decision-maker and public support for the community plan update. Throughout the majority of 2014, EHC’s communications bruised the industry’s reputation and generated heavy support for a community plan update that would improve the quality of life in Barrio Logan and the surrounding neighborhoods.

With persistence, strategy and creativity, EHC and Mixte fought tirelessly for what was right for our communities and never gave up– proving how powerful resilient people and resilient communications are despite the odds. To come out of this battle with two of the regions most prestigious PR awards honoring our work.. well, for once in my communications career, I really am speechless.

*Note: Mia and Sarah also won a pair of tickets to the Del Mar Racetrack and a $50 Walmart gift card by answering Balboa Park trivia questions via Twitter. Both have yet to be redeemed.

One Shared Voice: The Power of Communications for Coalitions and Work Groups

Bringing the Creative Community Together in San Diego