Should San Diego be one of the top cities for biking in the country? Yes. With 70 and sunny littering the “weather” reports, a remarkable coastline and some of the best sightseeing in the country, San Diego seems to have a natural place at the top of the bike-friendly-city list.

Is San Diego one of the top cities for biking in the country? Unfortunately, far from it.

Mixte went to Washington, D.C. with the San Diego County Bike Coalition for the nation’s premiere bike advocacy conference, The National Bike Summit, to find out why and how to fix it.

They had me biking in heels.

The conference had begun and I was in jeans and high heels, on a bike-share bicycle in Washington, D.C., pedaling along a guided tour of the bike infrastructure in the region. So, it was the perfect day. 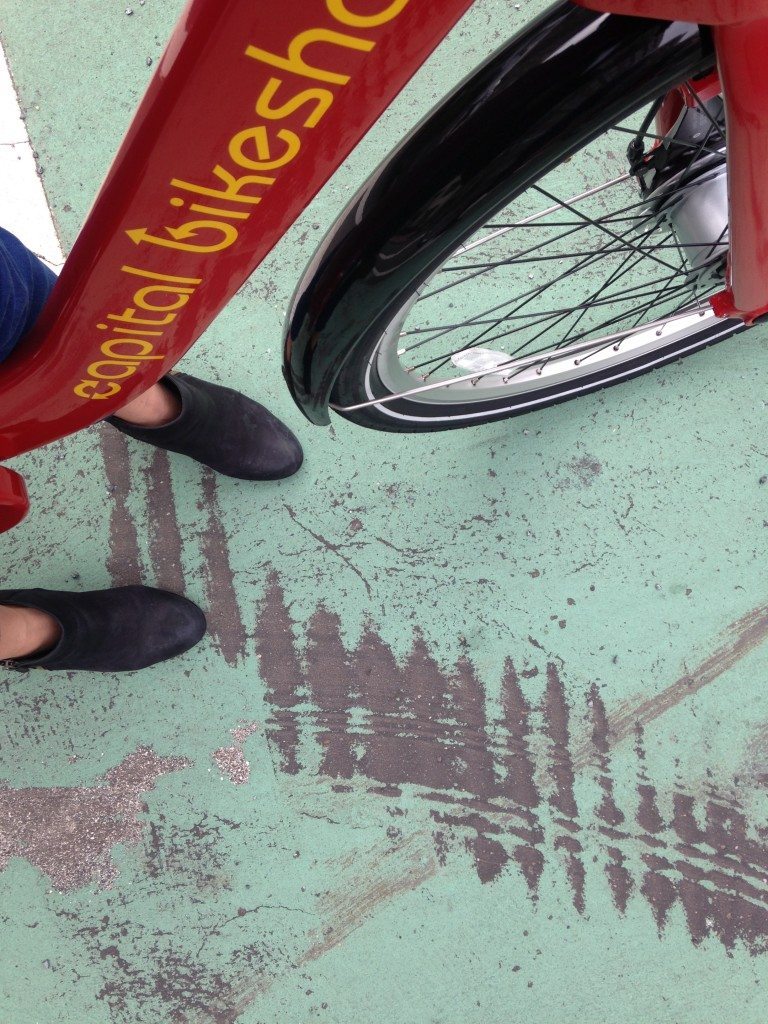 Andy, the San Diego Bike Coalition executive director, and Michelle, the Bike Coalition’s education programs manager, met me the morning of March 7 for the tour. In untraditional bike attire we pedaled through the heart of Washington, D.C. into Arlington, Virginia, and back.

Surprisingly, D.C. has some of the best bike infrastructure in the country. I went to college less than 15 minutes away and I had no idea how far my city had come. With the recent addition of a city-wide bike share program and the complementary addition of protected bike lanes and connected routes along dense corridors in the city, the region has seen its bike commuters soar. 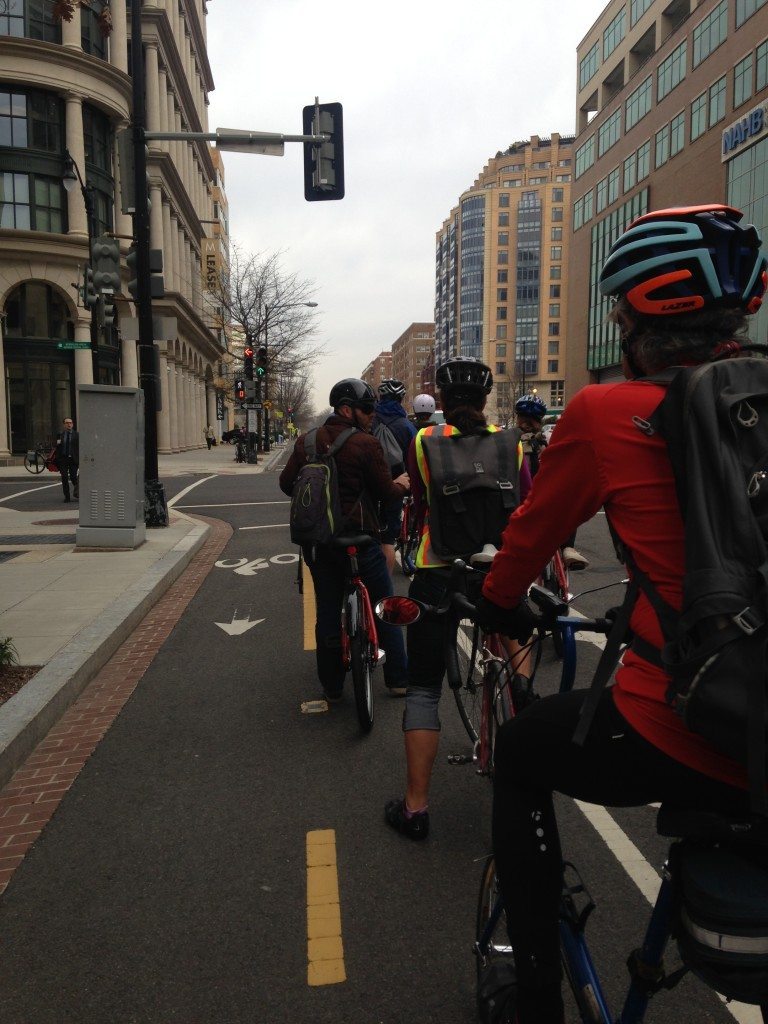 According to our tour guide, the sign below marks a great step for bike infrastructure in the region. This narrow corridor runs alongside an elementary school and a playground. To make the pedestrian area less dangerous, the road closes to automobiles for the 2.5 hours after children get out of school.

But it doesn’t close to bikes. This car-free corridor encourages bike travelers to take this route and keeps automobiles on the main roads instead of taking neighborhood streets.

The result? Children and bicyclists have safe places to ride and play. 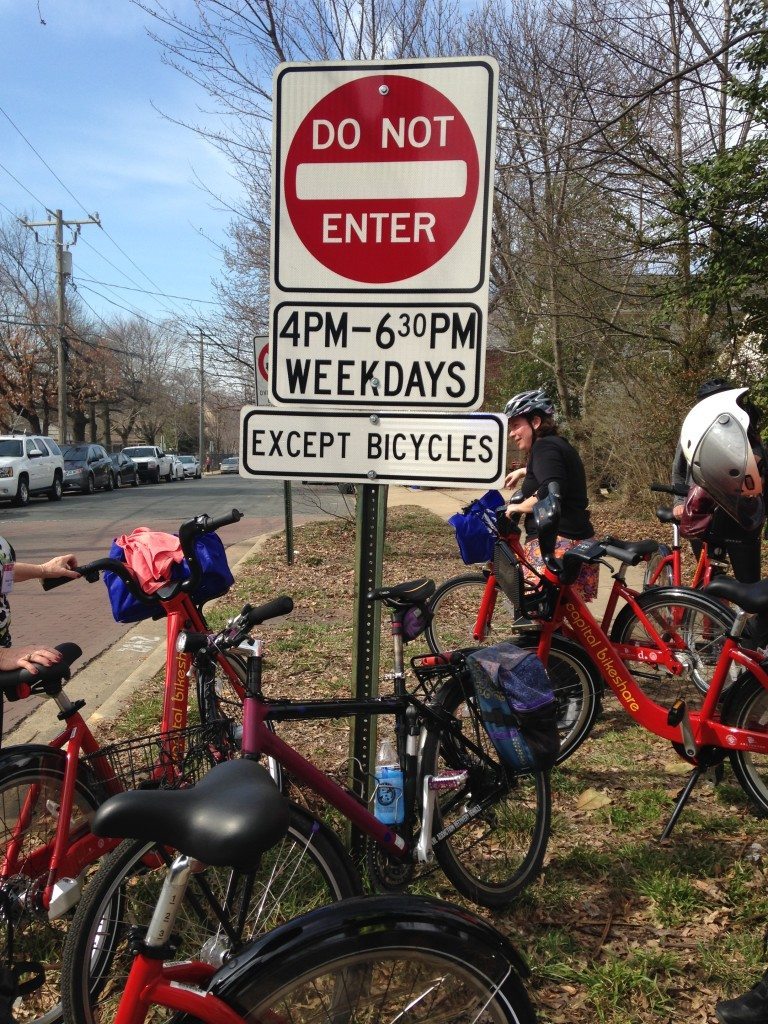 I couldn’t help but compare the progress of our nation’s capitol to that of San Diego, and notice how far we have to go. But instead of feeling like the light at the end of the tunnel was too far away, I felt inspired and excited. I realized the light is far but still attainable and that cities that respect bike commuting truly are achievable.

This isn’t a lavish dream- this is a realistic possibility.

After exploring the city on two wheels with other people who love bikes from around the country, I used D.C.’s metro network to get home.

I had two thoughts while on the metro.

First, I marveled at the easy-to-use and easy-to-access transit system the city has set up. With trains running in every direction throughout the city and maps, signs and pay stations that operated effortlessly, I felt a pang of angst that San Diego didn’t have something so comprehensive. I was jealous!

Secondly, I thought how proud Environmental Health Coalition would be of me if they knew I had spent the day biking and taking transit. I had become an east-coast embodiment of transportation justice; a concept the organization has spent the past two years advocating for in San Diego’s low-income communities of color.

I went home and dreamt soundly of trains and bikes and transit networks and protected bike lanes and healthy communities. 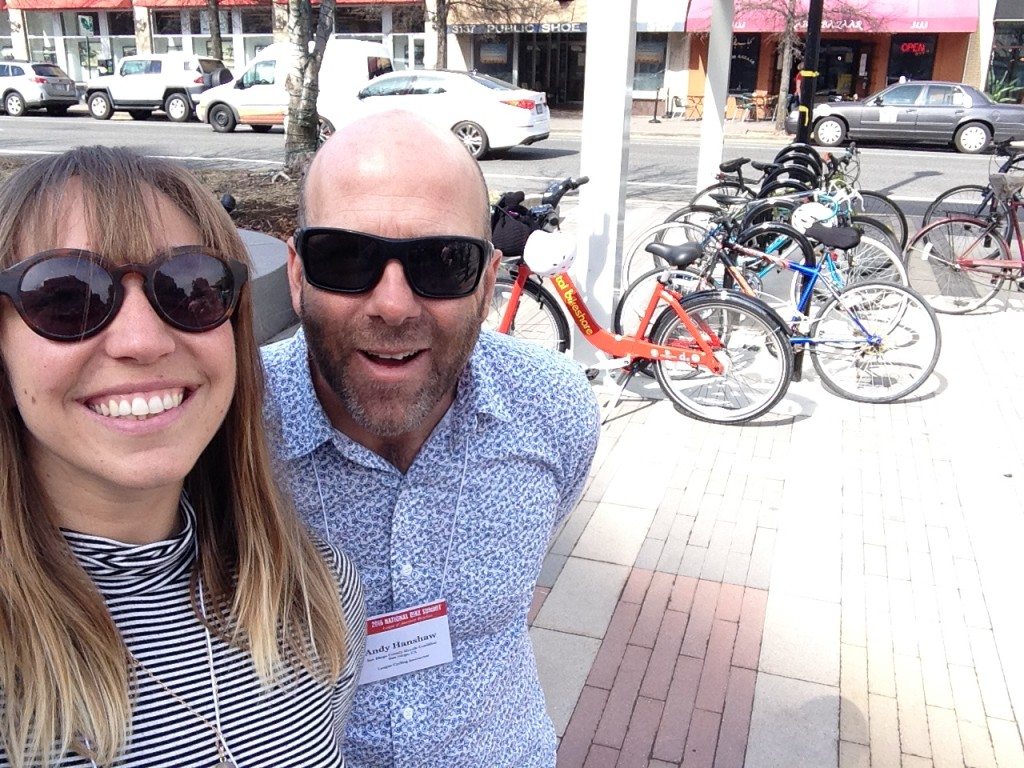 On March 8, I took the metro into downtown D.C. once more, only this time getting off in the heart of the political arena. It was advocacy day.

Andy and I spent the afternoon in the offices of our country’s Congressmen and Congresswomen, talking about the importance of bike infrastructure and safety in California districts. We talked about the improvements San Diego has made in the past year, including passing a climate action plan that calls for 6 percent of San Diegans to commute by bike by the year 2020, as well as the recent bikeshare program San Diego adopted.

“Now,” we would say, “we need support more than ever before. We have the goals, but the only way we’ll reach them is by making people feel safe riding their bikes.”

The highlight of my day was going to Congressman Scott Peters’ office; Andy and I both live in his district in San Diego. When we walked in, recognizable photos of our sunny and 70 home greeted us and the staff welcomed us in warm spirits. After a lively and engaging conversation about our city’s need for bicycling support, we noticed an award on his wall that the Bike Coalition had given him more than five years ago. (You can see it below in the top left.) 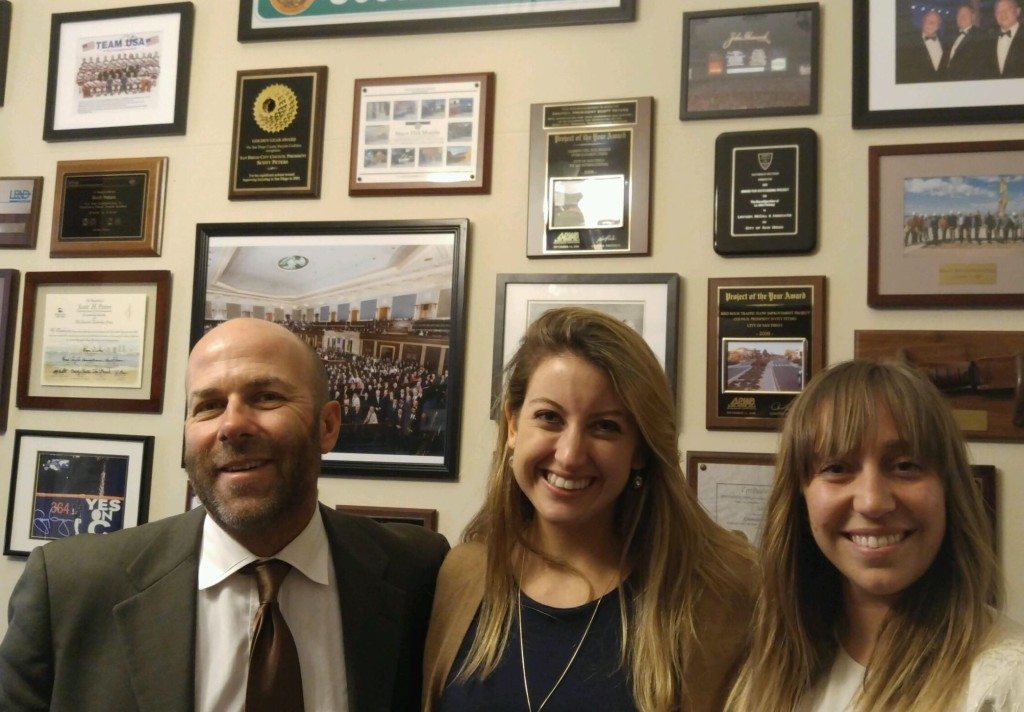 What could feel more supportive than speaking with your Congressman and noticing a bicycle award on his wall from a half decade ago? I felt happy and heard.

Afterwards, Andy and I decided to take advantage of the abnormally warm weather and go for a casual bike ride. 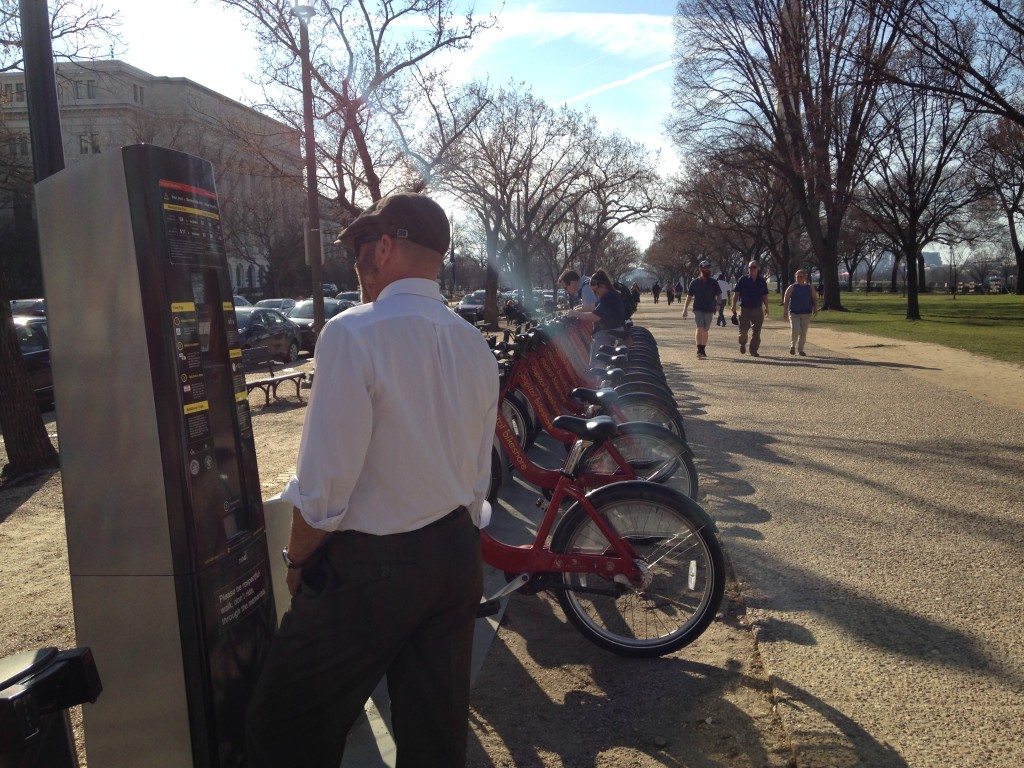 Selfies on bikes are occasionally allowed when in the nation’s capitol on a beautiful day. 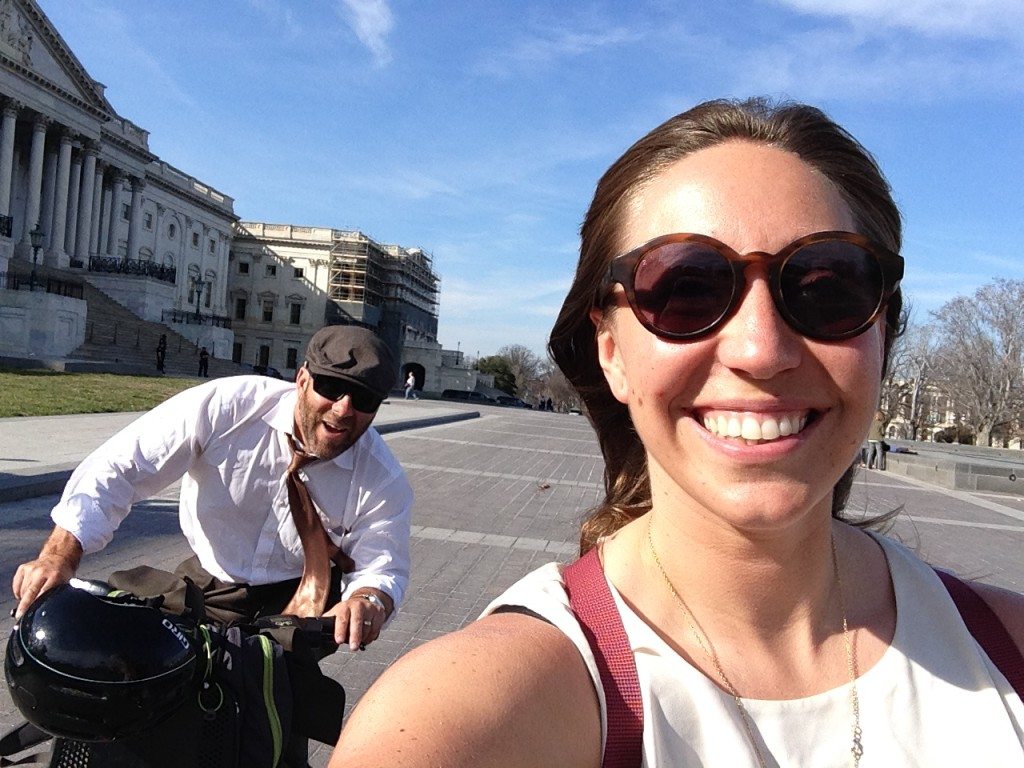 We pedaled around and visited the Washington Monument. 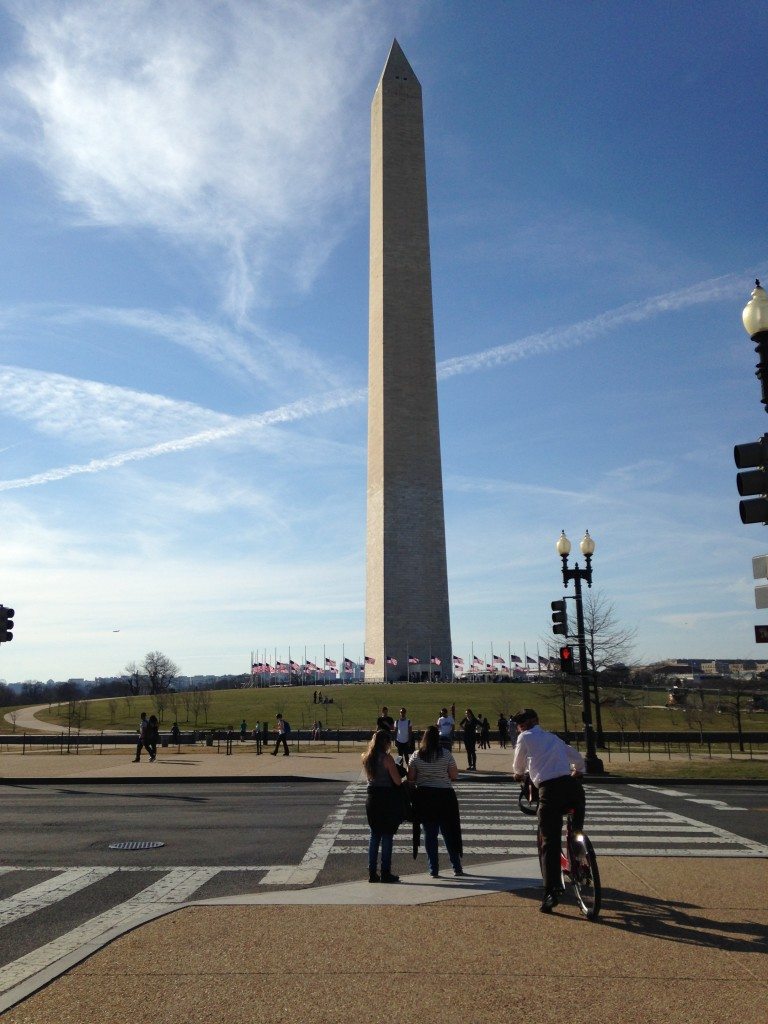 We also rode by the Capitol building – using the bike lanes, of course. 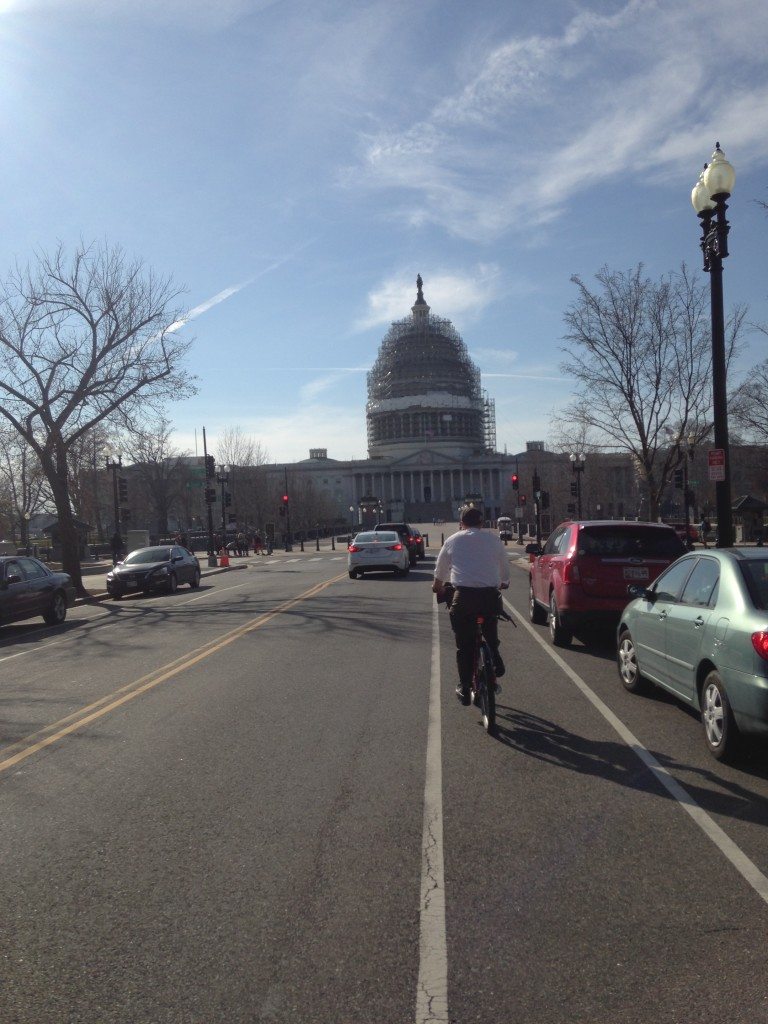 At the end of the day, we reunited with our friends from San Diego for a band-like photo on the Capitol steps. We felt blissfully tired from a day of walking around the city, advocating for a more bike-friendly San Diego and pedaling to remarkable national monuments using the dreamy (yes, dreamy) bike infrastructure of Washington, D.C. 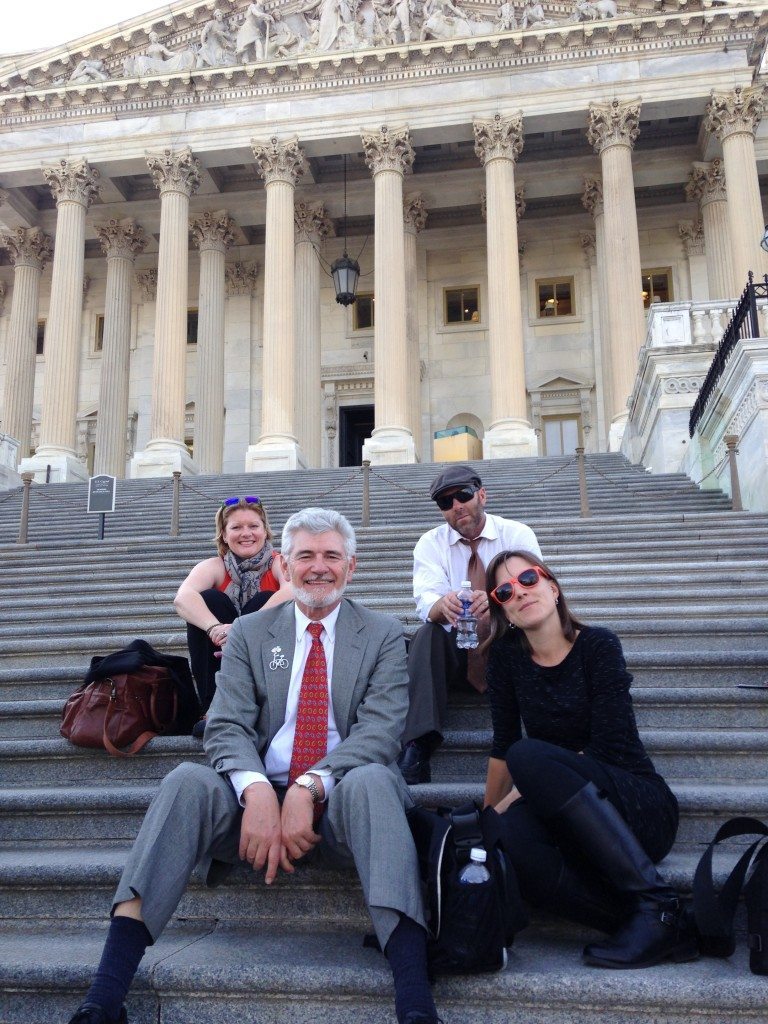 The National Bike Summit reminded me that bike-friendly cities don’t just happen. It takes a lot of grassroots advocacy to change the mentality of a car-centric culture and open millions of minds to the possibilities of life by bike.

Breaking down daily habits and changing behavior may be an intricate task, but we know it’s a worthy one. After tireless efforts from dedicated people who truly believe in the power of bicycles to make lives better for all people, and for the world, we hope to shift the conversation in San Diego.

“This is the answer to our recurrent struggles with density, parking, pollution and climate change,” we hope they’ll say.

“We see the long-term benefits of supporting bikes in San Diego,” we hope they’ll say.

“Bicycles are for everyone,” we hope they’ll say. 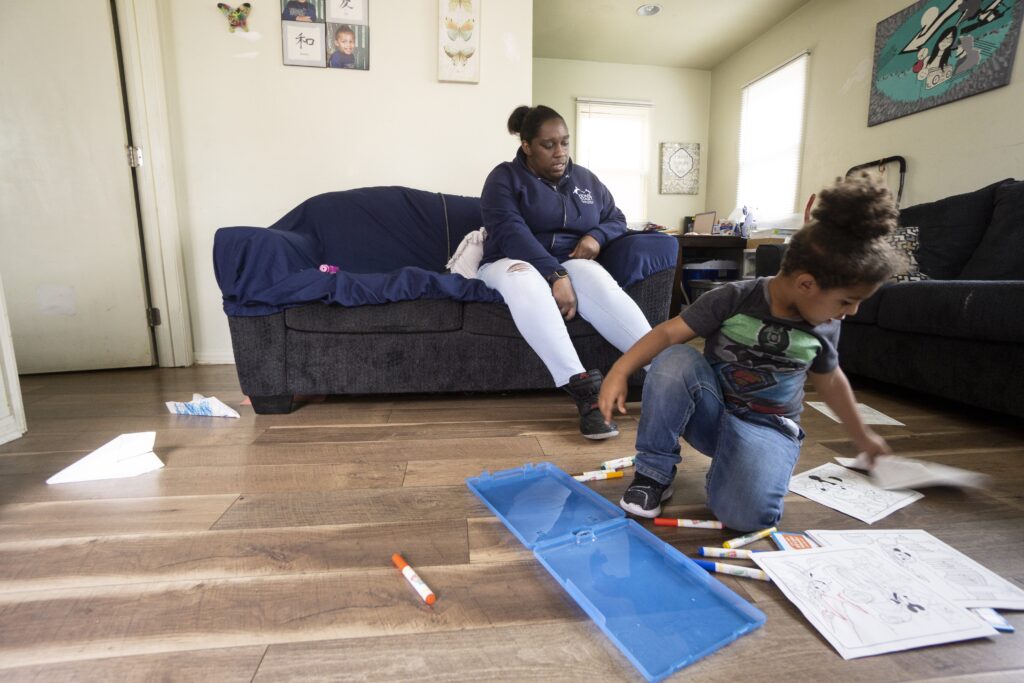