Sojourners is a national Christian organization committed to mobilizing people of faith for social justice, inspiring hope and building a movement to transform individuals, communities, the church and the world.

As misinformation, voter suppression tactics and widespread fear around COVID-19 threatened the ability of all voices to be heard in the 2020 general election, Sojourners created the Lawyers and Collars program in partnership with TURNOUT Sunday – an initiative of the Skinner Leadership Institute and the National African American Clergy Network. The project aimed to bring together faith leaders, attorneys and civic engagement organizations to focus on voting justice.

Sojourners worked with Mixte to spread the word about its voter protection efforts. Specifically, Sojourners aimed to educate the public – particularly Black communities in election battleground states – on their voting rights, and hold state election officials accountable for a free, fair and safe election.

The goal was to defend the right to vote and combat voter suppression tactics by:

How We Did It:

Firstly, Mixte collaborated closely with Sojourners to identify 10 battleground states in the U.S. states notorious for oppressive voting laws. Next, we dove into a regimented yet flexible strategy targeting traditional media outlets within our focus states. We met daily with Sojourners to discuss the morning news cycle and identify opportunities where our advocates could make their voices heard amongst the fast-paced news surrounding the election.

We also collaborated with partner community leaders who volunteered as poll chaplains to keep the peace at the polls and maintain the integrity of the Black vote. When the media was interested, Mixte worked with these folks to ensure each interview reinforced the messaging Sojourners set out to amplify in mainstream media. 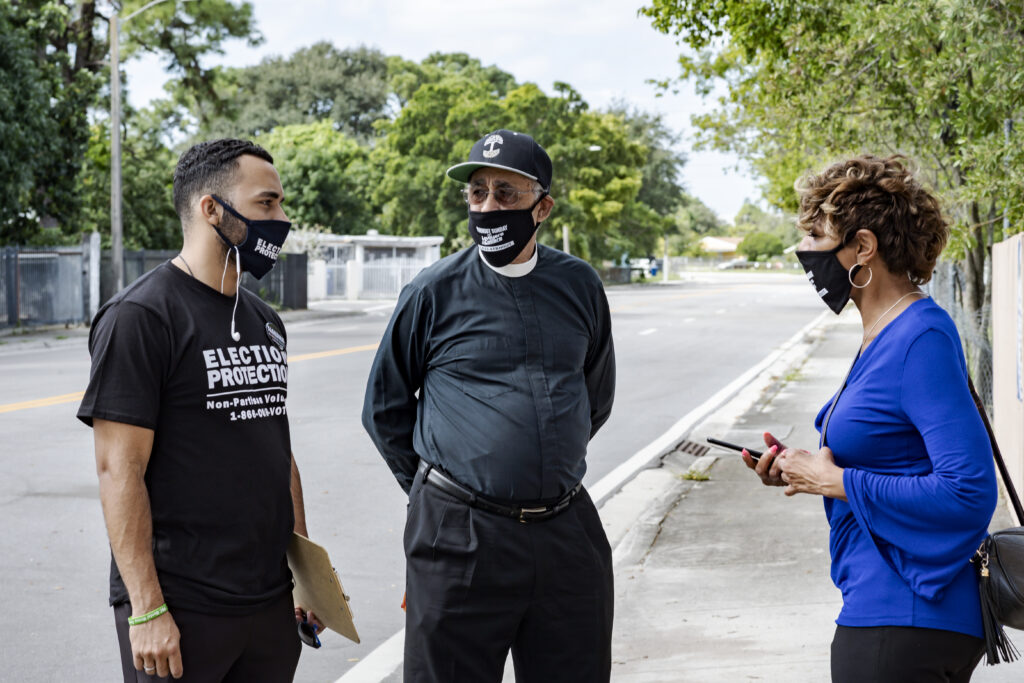 In total, we earned 32 total media hits in local news outlets across the United States. We helped to draft op-eds for each local market that focused on faith leaders’ perspectives on Black voter suppression – including this one by Sheila Tyson, Jefferson County Commissioner and native of Birmingham, Alabama.

Personal storytelling was an important component of this project’s success in the media.

Connecting our community partners’ faces and stories to the issue of voter suppression boosted media interest locally and nationally.

This was especially true internally. The MixTeam met personally with clergy, lawyers and other community partners to better understand their story. This helped us better capture their voices and stories through campaign assets.

Internal systems helped us keep up with this fast-paced project with our client and multiple partners.

Our internal systems were dialed in. We knew what needed to be done and when, how to communicate with stakeholders and how to organize our assets.

This also allowed us to be responsive to the fast-paced issue that was getting a lot of media coverage. Because of our systems, we had space to respond to media requests and other current conversations in the moment.

Finally – voting rights are still under attack despite similar nationwide efforts in support of electoral justice in 2020.

Our partnership with Sojourners helped to empower leaders and their communities with important information about voting rights in 2020. However, a year later, those rights are still under attack. As we approach the 2022 midterms, protecting the right to vote is still just as important. Learn more about Sojourners’ work to fight for free and fair elections here.

Did this spark your interest in improving your digital marketing, public relations, or strategic communications? Introduce yourself here and let us know how we can support the impactful work you’re doing!